Gravestone Doji Candlestick Pattern – What does it Mean & How to Trade 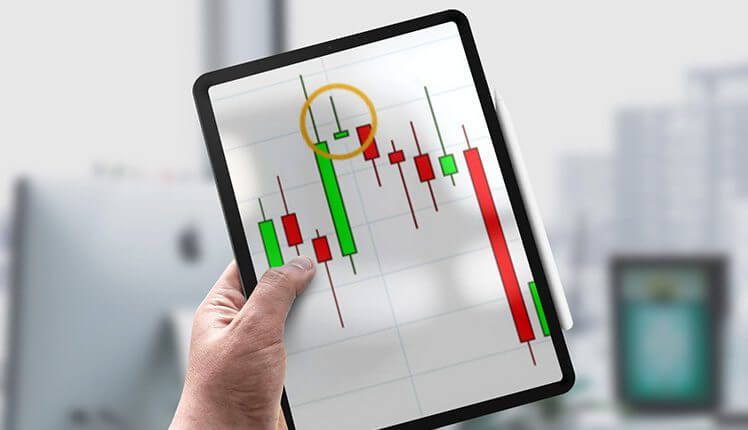 Gravestone Doji Candlestick is one of the most controversial Candlesticks should be known as a trader. It is easy to learn but so essential to know the concept beyond as well because Doji candlesticks usually give a Market Reversal or Continuation sign which can further lead to indicate a trading opportunity.

Bitcoin Charting and Amazing Swing Trades To Know About…

What is a ‘Gravestone Doji’ Candlestick?

Gravestone Doji is a candlestick in which the open and close price of the candle is at the same level or are very close on the same level.

Is Gravestone Doji bullish or bearish?
Gravestone Doji is not bullish. it is a bearish reversal candlestick which mostly occurs at the top of uptrends.

When this pattern is seen it means during the session, bulls lost their bullish power and couldn’t maintain the it (to keep the same price or raise the price to higher levels);
Meanwhile, bears came and took power from bulls and forced the price down to near the opening price.
So there is a tiny body or no candle body in a Gravestone Doji.

How a Gravestone Doji Forms?

A Gravestone Doji candle forms when the Open, Low and Close price of a candle are same or about the same price.

As previously mentioned, it is a bearish candle because bears took power from bulls and were successful to keep it (bringing the price down) till the close of the session and possibly can take the price down even more.

here we will explain how a Gravestone Doji forms:

in the below picture, you can see a gravestone doji which leads to a massive sell-off on EUR/Dollar chart in a 12-hour time frame.

as it is a 12-hour candlestick we zoom in into 45-minute candles, to see what happened from the beginning to the end of this 12 hour, which could form a gravestone doji.

Gravestone Doji is opposite of Dragonfly Doji which is a bullish pattern usually found at the end of downtrends.

To remember Gravestone and Dragonfly Doji shape and pattern, this is better to imagine how a dragonfly or a grave shape is.

A Dragonfly Doji looks like a Dragonfly and like the word T (which is like having the wings of dragonfly near the head on top). A dragonfly can fly and go up so as a dragonfly Doji can bring the price up and has bull power in it.

A Gravestone Doji looks Reversed compared to dragonfly Doji and is like the reverse of word T (Which is like sticking on the floor at the bottom like a grave). A grave wants to stick to the ground and has bear power.

Gravestone Doji is a long line candle which means the shadow should be at least 75 percent or higher of the candle hight.

In some cases, the base candle may resemble some other candlestick patterns. for example, shooting stars (if the body would be present but thin and there would be no lower shadow with the long upper shadow it could resemble a shooting star candle.)

The most important thing in Doji candlesticks is the overall shape and in what context they appear.

Examples of Gravestone Doji in Uptrends and Downtrends

Gravestone Doji in Uptrend (or at Top)

As it is said before, Gravestone Doji is most likely to come at the top of an uptrend.

In uptrends, it is a bad sign for bulls, especially in higher time frames like 4 hours or daily candles but the concept maintains the same in all time frames.
It means that the bulls are losing their power and bears are taking control of the price and are pushing the price down.

in an uptrend the appearance of a Gravestone Doji at the top indicates the announcement of uptrend end and the uptrend is most likely over.

It should be taken into account to get out of the trade before the price goes down and bears completely take control of the power.

There may be a chance to get out on highs in the next candle if bulls try more but its not always likely, and it is better to get out of the trade sooner if you are in a long position.

Gravestone Doji is a candlestick which is a strong confirmation to show the market top.

Gravestone Doji in Downtrend (or at Bottom)

Gravestone Doji in all cases is bearish so never mind it comes on uptrends or downtrends you should be careful about that.

The appearance in a downtrend my suggest the continuation of a trend or move to sideways trend and market ranging.

Gravestone Doji at the bottom is not a considerable bottom confirmation, and the market may still have room to go down even more.

When seeing a double Gravestone Doji, the market looks more bearish, and bull power is so weak.

Usually, if the low of the two Gravestone Doji breaks, the market starts to go down quickly.

You should not consider candles only in this situations. You should also look at RSI, Fibonacci levels, MACD, Moving Averages, Bollinger bands, CMF, OBV,… to see is there any confluent sign of whether the market is likely to go down or wait and give a new chance to bulls. However, remember, it is essential to wait for a confirmation and act upon it.

Wait for confirmation and check other indicators to prepare yourself for best market reaction both mentally and for risk management side.

In gap ups, it usually is a market top, and you should consider an exit. Maybe it is a gap down in the next day.

If you see a Gravestone Doji with the huge shadow it is very bearish in a high time frame, it may also be like a shooting star candle, and the appearance of them are showing the market is very bearish, and the price might go down soon (depends on the timeframe it appears on the chart.)

How to Trade a Gravestone Doji?

Now that we know the basics of a Gravestone Doji candle let’s get to know how to trade it.

Candlestick analysis is just one of the tools you have in your hands, although it is vital to know and use but it gives you best results when you combine it with other tools and methods like Fibonacci levels, horizontal support, and resistance levels, moving averages, analyzing momentum with RSI, MACD, OBV, CMF,… so set your trade accordingly.

As we said during the article, when you see a Gravestone Doji candlestick after a strong uptrend, it is likely that a trend reversal is going to happen.

Once you identified Gravestone Doji, a simple strategy can be opening a short position when you saw a confirmation, and low of the Doji breaks down.

Remember your trade trigger should be when the low of the Doji breaks down. If it holds market may hold and go higher, you never know.

When you enter a trade based on Gravestone Doji like any other trade, you should preserve your capital and place a proper stop loss on your trade to avoid huge losses if the trades go in the opposite direction.

The best place to put your stop is slightly above the wick (shadow) of the Gravestone Doji.
The problems are that your risk level may vary by the wick size. It may both be very small or very far and you risk too much which you may not be comfortable.

If you want to precisely look for a stop loss point, where it is not too tight that you get caught by stop hunters and also is not too far that your level of risk be too high you can use volume profiling and identify the exact point.

As it’s critical to enter a trade on proper time, you won’t be profitable or lose your profits if you don’t have an exit plan on your trading.

With Gravestone Doji, we recommend you to use the candle wick to exit it a trade. How exactly? I’ll explain with more details.

The next profit target can be double the size of the candle.

You can also draw Fibonacci levels and match and find the best potential spot where the size of the candle (or double it) reach the nearest fib level or support and resistance use.

If you use other methods like Elliot wave or TD sequential, you can also combine their exit points with this method to have the best results.

Sometimes you see that the trade is going fast and well in your favor, and you may decide to move from a short scalp to a longer term position like a day trading position or a swing position.

In this scenario, you should recalculate you stop and spot a lower (or higher) point for your stop loss to avoid losing your profits or your capital.

If you are a new trader, we don’t recommend you to do this especially in highly volatile markets like cryptocurrency markets and other liquid markets.

Bitcoin Charting and Amazing Swing Trades To Know About – June 28, 2021

Bitcoin Charting and Amazing Swing Trades To Know About…

We use cookies on our website to give you the most relevant experience by remembering your preferences and repeat visits. By clicking “Accept”, you consent to the use of ALL the cookies.
Do not sell my personal information.
Cookie Settings Accept
Manage consent

This website uses cookies to improve your experience while you navigate through the website. Out of these, the cookies that are categorized as necessary are stored on your browser as they are essential for the working of basic functionalities of the website. We also use third-party cookies that help us analyze and understand how you use this website. These cookies will be stored in your browser only with your consent. You also have the option to opt-out of these cookies. But opting out of some of these cookies may affect your browsing experience.
Necessary Always Enabled
Necessary cookies are absolutely essential for the website to function properly. These cookies ensure basic functionalities and security features of the website, anonymously.
Functional
Functional cookies help to perform certain functionalities like sharing the content of the website on social media platforms, collect feedbacks, and other third-party features.
Performance
Performance cookies are used to understand and analyze the key performance indexes of the website which helps in delivering a better user experience for the visitors.
Analytics
Analytical cookies are used to understand how visitors interact with the website. These cookies help provide information on metrics the number of visitors, bounce rate, traffic source, etc.
Advertisement
Advertisement cookies are used to provide visitors with relevant ads and marketing campaigns. These cookies track visitors across websites and collect information to provide customized ads.
Others
Other uncategorized cookies are those that are being analyzed and have not been classified into a category as yet.
SAVE & ACCEPT
Sign in
Sign in